Chemotherapy contributes to a quarter of cancer deaths: study 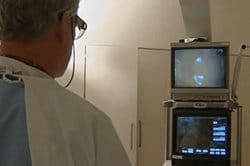 Chemotherapy contributes to a quarter of cancer deaths: study

A new study has raised serious questions about the use of chemotherapy for late-stage cancer patients.

The review of 600 cancer patients in Britain who died within 30 days of treatment has found that one in four of the deaths was either caused or hastened by the chemotherapy. Chemotherapy is a standard treatment for cancer but the study questions whether seriously ill patients can cope with it. The study was done by the National Confidential Enquiry into Patient Outcome and Deaths. The enquiry's members are drawn mainly from British medical royal colleges.
Most of those patients looked at in the study had chemotherapy as palliative treatment to relieve the symptoms of cancer - a cure had already been ruled out. The report found 40 per cent of them suffered significant poisoning as a result of the treatment.

“I think there's always a need to be cautious and it's very important that patients are fully informed of the risks as well as the potential benefits to treatment,” said Dr. Morse.

“But at the end of the day it will be the patient's decision as to whether to accept chemotherapy or not.”

The study asked whether patients were given enough information about the treatment. Dr Diane Morse says in one in five cases the decision to go ahead with chemotherapy was inappropriate.

“Where it was felt to be inappropriate, it was felt that the patient would have had better quality of life if the treatment had not been given,” she said.

“They were patients that were very close to the end of life and perhaps chemotherapy was not to the benefit to them.”

Professor Jim Bishop, the chief executive officer of the Cancer Institute of New South Wales, says Australia has much better cancer survival rates than the UK. But he says the study raises important questions for doctors here too.

“What it boils down to is not so much cautiousness but rather what does the evidence say,” Professor Bishop said.

Cancer Council CEO Professor Ian Olver says while chemotherapy is sometimes the best way to relieve the symptoms of cancer, some patients might not fully understand its limits.

“I think you have got to be very careful that the benefit is not either overstated or that the patient doesn't believe that it is going to do more than it can,” he said.

Based on an AM report by Sara Everingham.